In season 4, we took visitors back to the 1950s and 1960s. One wall was entirely devoted to Ellis Ceramics, a pottery set up in Melbourne in 1953 by Dagmar and Miloslav Kratochvil, immigrants from Czechoslovakia. Also on display was the work of other makers who, like the Kratochvils, adopted a mid-century sensibility characterised by natural shapes, simplicity of design, bright colours and abstract decoration.

The emphasis was on functional and decorative earthenware produced by commercial and semi-commercial potteries for post-war Australian homes. The featured form was the ramekin and we also devoted part of the display to fish.

The influence of European style on post-war Australian ceramics 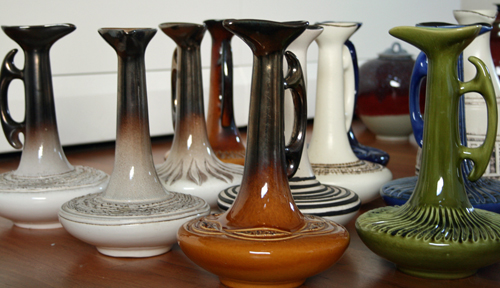 Functional stoneware and the philosophies of Bernard Leach dominated most of the decade”, wrote Frances Morgan of the 1960s in Pottery in Australia, 40/3, Sep 2001. This may have been true of Sydney, but Melbourne remained an important centre for earthenware until the late 1960s. More...

2012 -2013 opened with a bang with our River Music Fair, a most enjoyable event that brought the many friends and acquaintances we have made in the valley together for a day of music, art and culture, and forged our position on the Sapphire Coast gallery trail. Our Spring garden proved to be an attractive outdoor venue with the contours of the land lending a landscaped feel to the fledgling beds and trees. A hot and windy January with nearby bushfires set the garden back but it recovered and we noted a new maturity as the season closed. More...